THT’s vertical casting processes eliminate many of the issues associated with horizontal casting.

Parts Quality
By injecting the molten metal vertically, trapped gases and turbulence are eliminated, resulting in parts with lower porosity and higher density. Part quality is improved since the molten metal has a direct pathway to the die.

Eliminates Trimming
Because of THT’s unique direct gating, castings are near net shape and do not require a separate trimming operation eliminating time, equipment and additional floor space.

Less Tonnage Required
By eliminating the additional surface area requirements of a traditional runner/gating system, THT can cast parts utilizing less clamping pressures. The tonnage for THT’s machines reflect the shot force rather than the clamping force. For example, THT’s 100 ton machine has 100 tons of injection force compared to a standard horizontal machine having 100 tons of shot force, which would require a 400 ton clamping force.

Reduced Cycle Time
The cycle time using a multi-station vertical casting machine can be reduced by as much as 50% because it has the benefit of allowing you to complete other functions while parts are solidifying such as loading, unloading and lubricating. 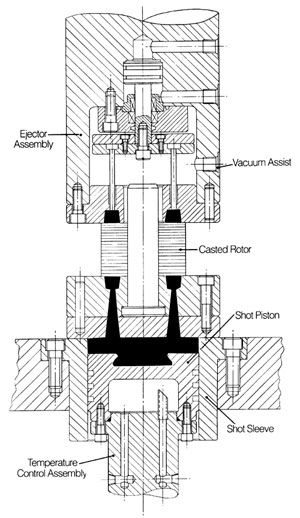